27 Quotes to Inspire Your Next Victory 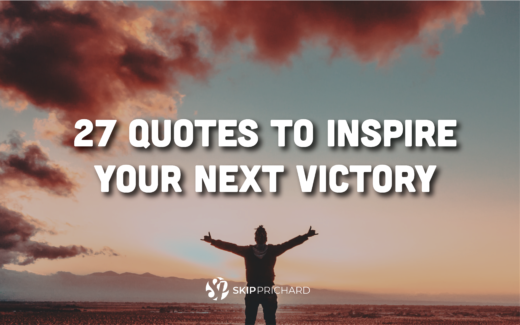 It may seem overly simple, but reading positive quotes is one way that I boost my spirits and confidence. And it makes sense, doesn’t it? If you want to be victorious, read quotes about victory.

Here are a few quotes to inspire your next big win.

“If you think you can win, you can win. Faith is necessary to victory.” – William Hazlitt

“Whenever you are confronted with an opponent. Conquer him with love.” ― Mahatma Gandhi

“Victory belongs to the most persevering.” -Napoleon Bonaparte

“You cannot expect victory and plan for defeat.”
― Joel Osteen

“In reading the lives of great men, I found that the first victory they won was over themselves… self-discipline with all of them came first.” – Harry S Truman

“The bud of victory is always in the truth.” -Benjamin Harrison

“I like to talk to myself ahead of time so when temptation comes, I’ve already made up my mind that I have the victory.” -Joyce Meyer

“The moment of victory is much too short to live for that and nothing else.” -Martina Navratilova

”To be prepared is half the victory.” -Miguel de Cervante

“There’s no reward without work, no victory without effort, no battle won without risk.” -Nora Roberts

“No victory without suffering.” -J.R.R. Tolkien

“Every action we take, everything we do, is either a victory or defeat in the struggle to become what we want to be.” -Ninon de L’Enclos

“Victory at all costs, victory in spite of all terror, victory however long and hard the road may be; for without victory, there is no survival.” – Winston Churchill

“Who you are tomorrow begins with what you do today.” ―Tim Fargo

“The more difficult the victory, the greater the happiness in winning.” -Pele

“Patience is the key to victory.” -Rumi

“Victory has a thousand fathers, but defeat is an orphan.” – John F. Kennedy

“Concentration and mental toughness are the margins of victory.” ― Bill Russell

“Somewhere in the world there is a defeat for everyone. Some are destroyed by defeat, and some made small and mean by victory. Greatness lives in one who triumphs equally over defeat and victory.” ― John Steinbeck

“Once you hear the details of victory, it is hard to distinguish it from a defeat.” ― Jean-Paul Sartre

“Abandon the idea that you will forever be the victim of the things that have happened to you. Choose to be a victor.” -Seth Adam Smith

“There always comes a time in life where you can either give up or step up.” -Graeme Rodaughan

“Victory is always possible for the person who refuses to stop fighting.” -Napoleon Hill

”If you believe in yourself and have dedication and pride – and never quit, you’ll be a winner. The price of victory is high but so are the rewards.” -Bear Bryant

This book is all about helping you win!

The post 27 Quotes to Inspire Your Next Victory first appeared on Skip Prichard | Leadership Insights.